Local Economies’ 2019 Slump Looks Likely to Continue, According to the Yelp Economic Average

The Yelp Economic Indicator Fell 1.3% Nationally in 2019, And Is Projected to Drop

Most local economies nationwide slumped in 2019, according to Yelp data, dragged down by weakness in restaurants and retail.

As the local economy goes, so goes the national economy. The productivity of most plumbers, pastry chefs, and personal-injury lawyers isn’t reflected in stock indexes and business headlines, but collectively they make up a vital part of the work force and the fabric of local commerce. We’ve been tracking local economic activity through the Yelp Economic Average (YEA) for the past year. In each of the four quarters that we’ve reported on the health of the local economy, national GDP has headed in the same direction as YEA.

If GDP growth continues to move the same way YEA does, we can expect fourth-quarter GDP growth to be below the third quarter’s level of a 2.1% increase.

The slowdown in overall economic growth in 2019 reflected business profits declining, which contributed to a fall in business investments. Uncertainty around trade policy also hindered growth.

Using Yelp’s unique data set, we designed YEA to measure something unlike existing economic indicators: the part of the national economy where business is done locally, near where you live, work, or travel. The link between YEA and GDP indicates that this important and understudied part of the economy, reported in near-real-time, moves the same way as the economy as a whole.

Fourth-Quarter Decline Looks Likely To Continue In The First Quarter

A weak fourth quarter contributed to the 2019 decline: YEA fell by 1.4 points to 97.9, the biggest quarter-over-quarter decline since a year ago, fueled by slumps in retail and services businesses. This is the fifth straight quarter that YEA has shown a level of local economic strength below 2016, as far back as we’ve calculated the measure.

Expect more of the same in the first quarter of 2020. For the first time, we’re forecasting the current quarter’s YEA scores, based on the last three years of trends. The forecast suggests a continued decline in local economic health—nationally and in many major markets and sectors. In the first quarter of 2020 we expect YEA to be dragged down by the retail and restaurant sectors, as well as weakness in many big state and metro economies: California, Texas, Florida, New York City, Chicago, and Seattle.

One Year Of Tracking The Local Economy

We’re a year into our reporting on the state of local economies through the Yelp Economic Average, which measures local economic activity across business sectors. We use Yelp data to track the health in consumer demand and business growth of local economies—nationally as well as in 50 top metros around the country and, for the first time this quarter, in every state and Washington, D.C.

Yelp has information not only on millions of U.S. brick-and-mortar businesses but on the consumer demand expressed by the millions of consumers who view, review, and post photos of businesses on Yelp every day, which researchers have found makes us well positioned to accurately and quickly measure a huge swath of the economy that’s often missed by many major indicators.

Since Donald Trump took office in Jan. 2017, political polarization has extended to the local economy. States won by President Trump in the 2016 election have experienced more local economic growth during his tenure than states that voted for Hillary Clinton.

We measure economic health relative to the fourth quarter of 2016, the last of Barack Obama’s presidency. In 2019, blue states’ local economies lagged red states’ by 2.8 points relative to 2016, widened from a gap of 1.3 points in 2018.

The red-blue local-economy gap persists in all four major regions of the country: the Northeast, South, Midwest, and West.

The gap was especially striking at the top and bottom of the rankings of states’ local economic performance since 2016. The seven lowest-ranking states in 2019 all voted Democratic in the 2016 presidential election.

Economic Bright Spots Outside The Limelight

The states and metros that have gained the most ground since 2016 aren’t the biggest or highest-profile ones.

We’ve been tracking boomtowns in recent quarters: Cities that anchor metro areas with the country’s strongest combination of business growth and consumer demand.

The top metros in 2019, among the 50 major metros around the country we’re tracking, were Milwaukee; Honolulu; Portland, Maine; Buffalo; and Pittsburgh. Services businesses fueled gains in the metros, with some help from localized positive trends in food and nightlife businesses: food trucks in Milwaukee; sushi in Portland, Maine; and breweries in Pittsburgh. Orlando, New Orleans, and two of the 2019 boomtowns—Portland and Honolulu—look most likely to continue to succeed in the first quarter of the new decade.

Meanwhile, the bottom five metros during the year include Portland, Oregon; Dallas; Chicago; and two in California: San Jose and San Francisco. Retail businesses led the decline, along with Tex-Mex restaurants in Portland, lounges in Chicago, and auto businesses in Dallas.

Five of the bottom 12 are in California. While the Golden State’s economy is the fifth largest in the world, it ranks fifth from the bottom in YEA for 2019. California retail was hit particularly hard, with low-tech—shoes and sporting goods—and high-tech—computers and mobile phones—all suffering big declines.

States with the most economic growth in 2019 were the Dakotas, Wyoming, Hawaii, and Alaska, with growth driven by services sectors and several restaurant and food businesses, such as juice bars in the Dakotas and Tex-Mex in Alaska. In the current quarter, we expect continued gains in some of these top-performing states, as well as in Maine, Louisiana, and Nevada.

Among the 50 states and Washington D.C., the five lowest rates of economic growth since 2016 were posted by Washington, D.C.; Illinois; Massachusetts; Connecticut; and California, due in part to declines in retail businesses. Oregon, Delaware, and Oklahoma look likely to fall in this quarter, with D.C. and Connecticut expected to continue to slump.

Local economies are made up of local businesses, and there were many bright spots amid the overall decline. New businesses with high levels of consumer interest have helped fuel growth: Claremont Village Eatery of Claremont, CA, supporting the breakfast and brunch category in its 4.3% rise since 2016; Naples Junk Removal of Naples, FL, contributing to 23.5% growth in junk removal and hauling; and Duncan Tree & Landscape of Lewisville, Texas, doing its part in a 22.5% increase in tree services.

A Tough Year for Retail, Food, and Auto Businesses

Three crucial sectors dragged down the local economy in 2019 and each one looks likely to keep falling this quarter.

The restaurant, food, and nightlife businesses also slumped. Collectively they were down 1.3 points in 2019 from a year earlier, driven by ice cream, grocery stores, and New American cuisine.

Fast food took a big hit, down 1.5 points from a year earlier, hurt by a weak fourth quarter, as diners opt for less standard dining and drinking options such as breweries, food trucks, and juice bars. 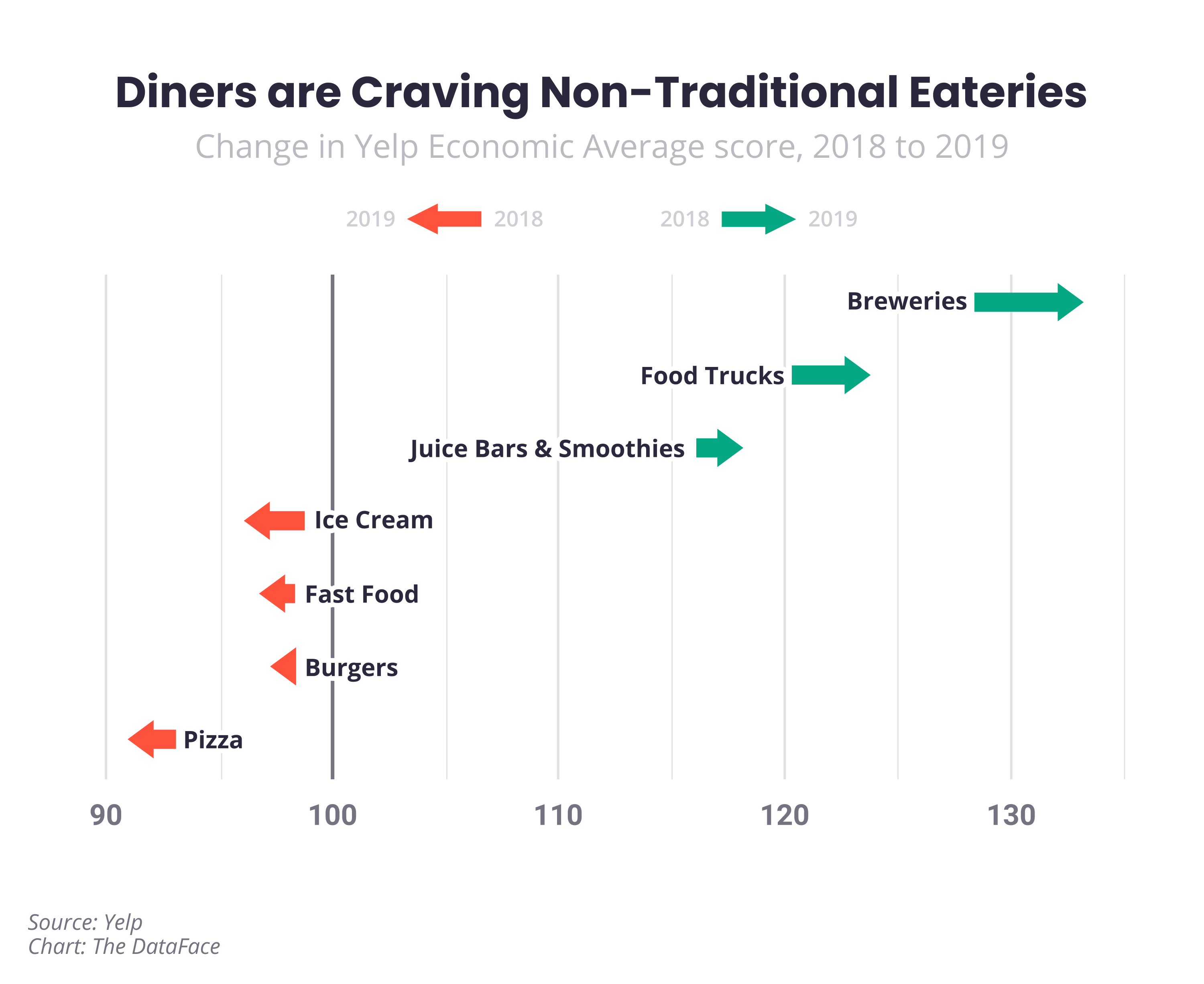 Auto businesses also slumped, down 2 points from a year earlier, reflecting the possible effect of ride-sharing’s popularity on auto businesses such as gas stations and auto repair shops that rely on high driving levels in the general population.