For the Diverse Business Report, we’re using a new methodology that tracks several indicators on a daily basis. For more on the methodology for this report, click here.

Throughout the course of the pandemic, millions of businesses have been impacted by public health restrictions and economic uncertainty. Unfortunately, businesses owned by people in underserved communities have been disproportionately impacted. Yet, these diverse businesses are critical to the recovery of local economies.

On Yelp, business owners can choose to display identity attributes, such as Black-owned, Women-owned and Latinx-owned, which increases awareness of businesses owned by these underserved individuals. Consumers can then easily search for and discover businesses that have indicated these attributes – aligning their spending habits with their values. To expand on the currently available identity attributes, today, Yelp is launching an Asian-owned attribute in partnership with Gold House, a non-profit organization that forges the inclusive unity, representation, and success of Asians and Pacific Islanders. In the future, once the Asian-owned attribute is more broadly adopted, we will be able to expand on this report with data that shows how consumers are interacting with Asian-owned businesses on Yelp.

Despite the challenges that face these underserved communities of business owners, Yelp data reveals how women, Black, and Latinx business owners across the nation have persevered. Based on these identity attributes, these diverse businesses are more likely to endure closing and reopening more than once compared to businesses overall. Yet many of them have survived, as Yelp data also shows that consumers are increasingly looking to support Black, Latinx, Asian and women business owners. In addition, women, Black, and Latinx-owned businesses are more likely to have higher ratings and reviews on Yelp, as well as a higher rate of community engagement through review responses compared to all businesses.

Women, Black, and Latinx business owners have shown tremendous resilience during the pandemic. Among businesses that were open at the start of the pandemic and that closed and reopened at least once, roughly 29% of businesses owned by women, Black people, and Latinx people reopened twice or more — notably higher than the share among other businesses.

Women, Black and Latinx business owners were more likely to endure multiple reopenings during the pandemic 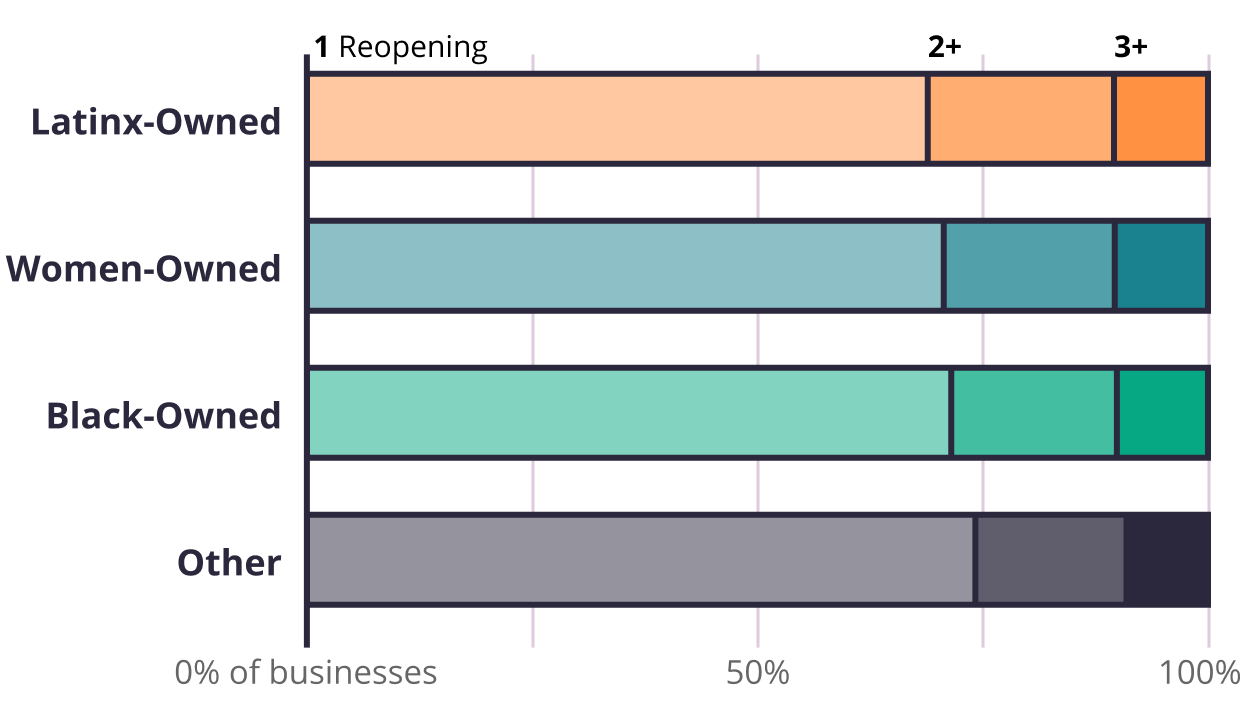 People across the nation have come together to reject racism, sexism and oppression that has plagued our country for centuries. Yelp data shows that consumer desire to support Black, Latinx, Asian and women business owners surged during the pandemic in light of the devastating impacts on underserved communities. 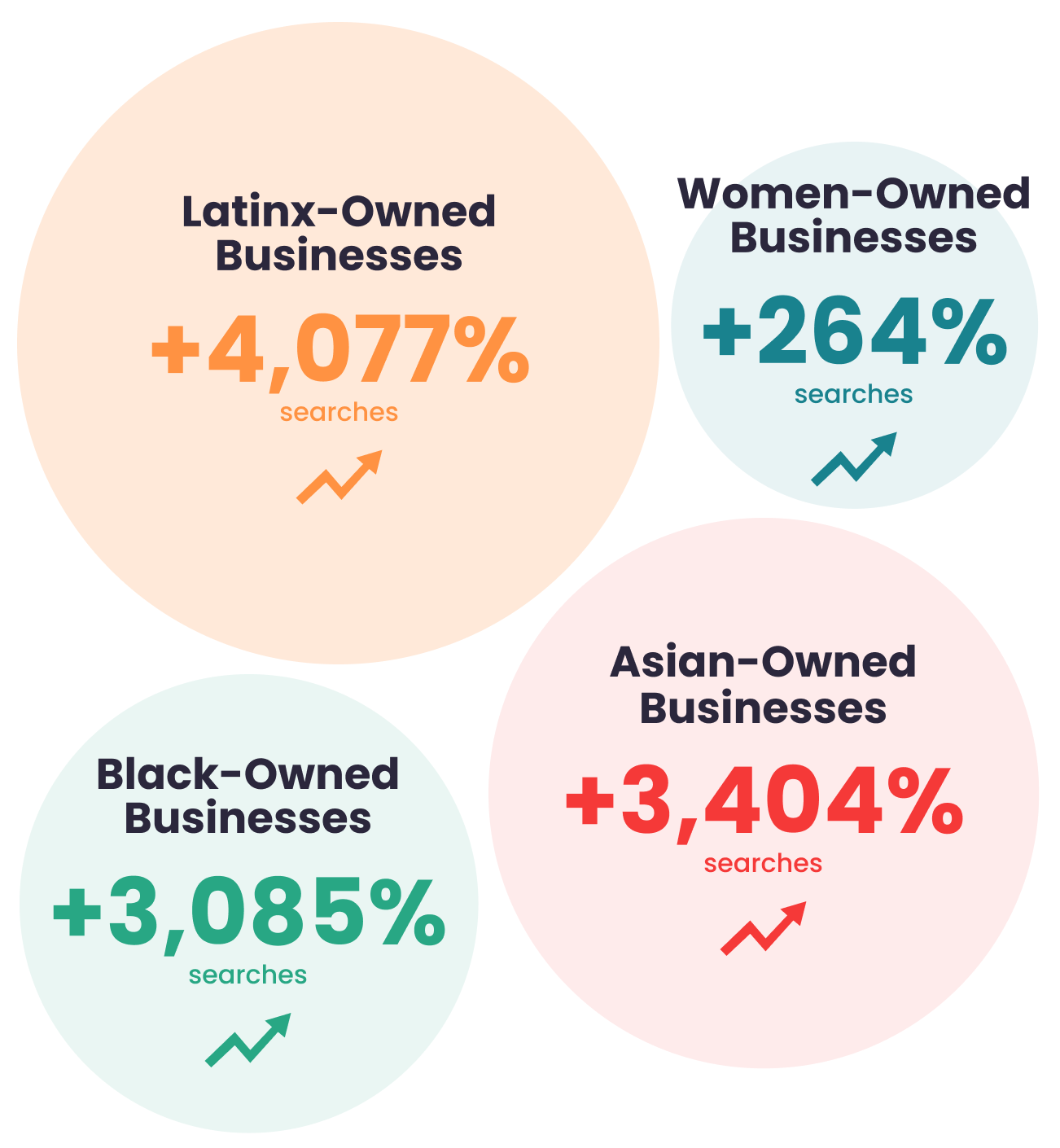 Based on Yelp’s identity attributes, not only have consumers increasingly sought out Black, Latinx, and women owned businesses they’ve also engaged with many of these businesses more compared to other businesses. The consumer interest – defined by viewing a business page, posting a review or posting a photo – in businesses owned by women, Black, and Latinx proprietors increased in many categories and metro areas after the business owners selected an identity attribute on Yelp. 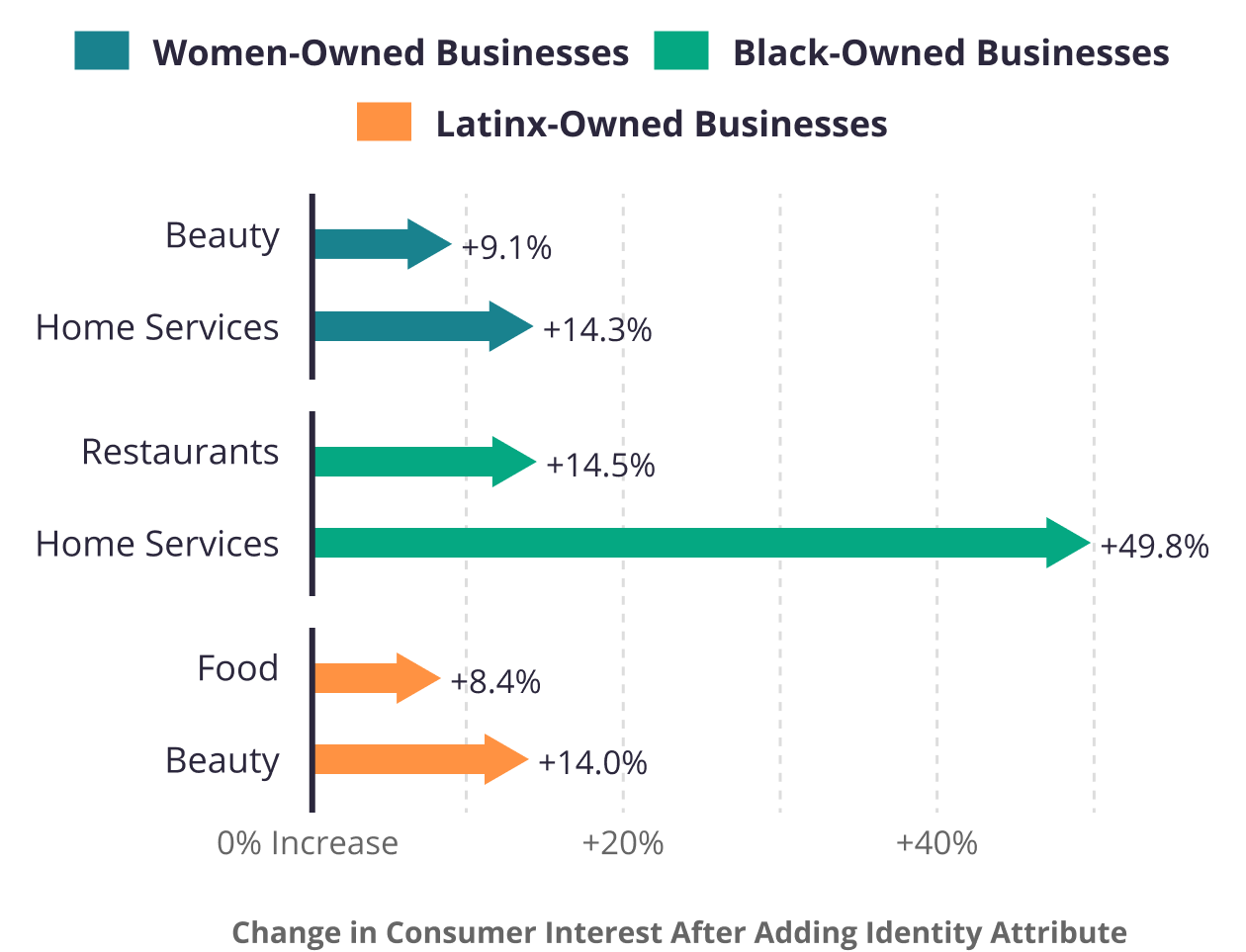 On average, women, Black people, and Latinx people who own businesses engage with consumers’ feedback on Yelp more often than businesses overall. Consumers also rate many businesses owned by women, Black people, and Latinx people higher than other businesses, but the ratings edge existed prior to when the businesses indicated their identity attributes – demonstrating that the higher rating more likely reflects a great customer service experience than any correlation to the identity attribute(s).

This year, through February, Latinx business owners have responded to reviews at a rate 8% higher than average, Black owners at a 18% higher rate, and women owners at a rate 42% above the norm.

Reviewers increasingly know and care about who owns the business they’re reviewing. Mentions of women owners in reviews rose 76% in February 2021 from a year earlier, mentions of Black business owners increased 195%, and mentions of Latinx owners were up 58%.

Reviewers Are More Aware of a Business’s Ownership

Growth in review mentions of Black, women, and Latinx business owners since February 2020

Since launching the women-owned attribute in March 2019, the rate of adoption has remained high: U.S. businesses marked as women-owned have nearly tripled in the past year, from a little more than 80,000 on Jan. 31, 2020, to nearly 240,000 on Feb. 28 this year. More than 1,200 categories, representing nearly every category on Yelp, have a woman-owned business. Since launching the Black-owned attribute in June 2020, nearly 25,000 businesses have adopted the attribute, as of Feb. 28, across more than 1,000 categories on Yelp. Additionally, more than 15,000 businesses have marked themselves as Latinx-owned, the newest identity attribute introduced in September 2020. Nearly 1,000 categories on Yelp have a self-identified, Latinx-owned business.

Yelp data tracks when business owners opt into features on their business page. This is the count of businesses that have self-identified as one or more of the following identity attributes: Black-owned, Latinx-owned, and women-owned.

We compare the frequency of “identity attribute” words (including “Black owned”, “Latinx owned”, “Women owned”, and “Asian owned”, and similar words) relative to all searches in February 2021 compared to February 2020. For “Asian owned”, Yelp included attribute words that encompass the variety of identities included within Asian community, including, but not limited to: “japanese owned”, “indian owned”, and “korean owned.” Both searches where consumers directly type a search into the search bar and where consumers click on a suggested term or phrase are included.

Yelp’s consumer interest metric is measured as the count of a few of the many actions consumers take on Yelp, including page views, posting reviews, and posting photos. To measure the impact of adoption of identity attributes on local business, the difference in average consumer interest is measured between total businesses in the category and the selected sample (businesses that opted into an underserved identity attribute), during a specific period after the attribute was selected and the same length of period before the attribute was opted into. For women-owned and Black-owned businesses, June through August compared to October through December, as the attributes were available in March 2019 and June 2020, respectively. For Latinx-owned businesses as the attribute was available in September 2020, November 2020 compared to January 2021.

Yelp data on ratings and reviews are filtered for businesses, with at least one review, owned by underserved communities.

Response to Reviews and Review Mentions

Review mentions of Black-owned, Latinx-owned, and women-owned are counted in February 2021 and compared to the same period in 2020.

On each date, starting with March 1, we count U.S. businesses that were temporarily closed and reopened through February 28, 2021. This includes only businesses that were open at the start of the pandemic and that closed and reopened at least once. A reopening is of a temporary closure, whether by using Yelp’s temporary closure feature or by editing hours, excluding closures due to holidays. Each reopened business is counted at most once, on the date of its most recent reopening.

Reopenings are based on when they're indicated on Yelp, as such, the data may lag slightly from the true opening or reopening date due to a delay in reporting from consumers and business owners.