For the parents of school-age children, the coronavirus pandemic has made this year’s back to school season anything but routine. Across the country, college students return to colleges that may roll back to virtual learning at any moment, business owners continue to stay nimble amid changing guidelines and local outbreaks and parents navigate managing at-home learning environments for their children and their own work schedules.

Comparing March through July 2020 to the same time period a year earlier, we found mentions of homeschooling are up 144% in reviews and 172% in searches, indicating a consumer demand for resources connected to children learning at home as parents look to supplement hybrid and virtual learning efforts from school districts. In searches, homeschooling mentions have remained very high throughout the pandemic, peaking in July on Yelp.

Homeschooling Is Top of Mind

College Towns Have Been Disproportionately Impacted by COVID-19, But Are Bouncing Back

There are many small cities in the U.S. where the local college drives the economic activity in the city, but when students clear out of those college towns months before the businesses in the area had planned for, it can have detrimental effects on the local economy. Yelp data shows that as of August 17, businesses in college towns have a 24% higher permanent closure rate, on average, compared with the permanent closure rate of its respective state, since March 1.

Businesses Are Closing at a Higher Rate in Most College Towns 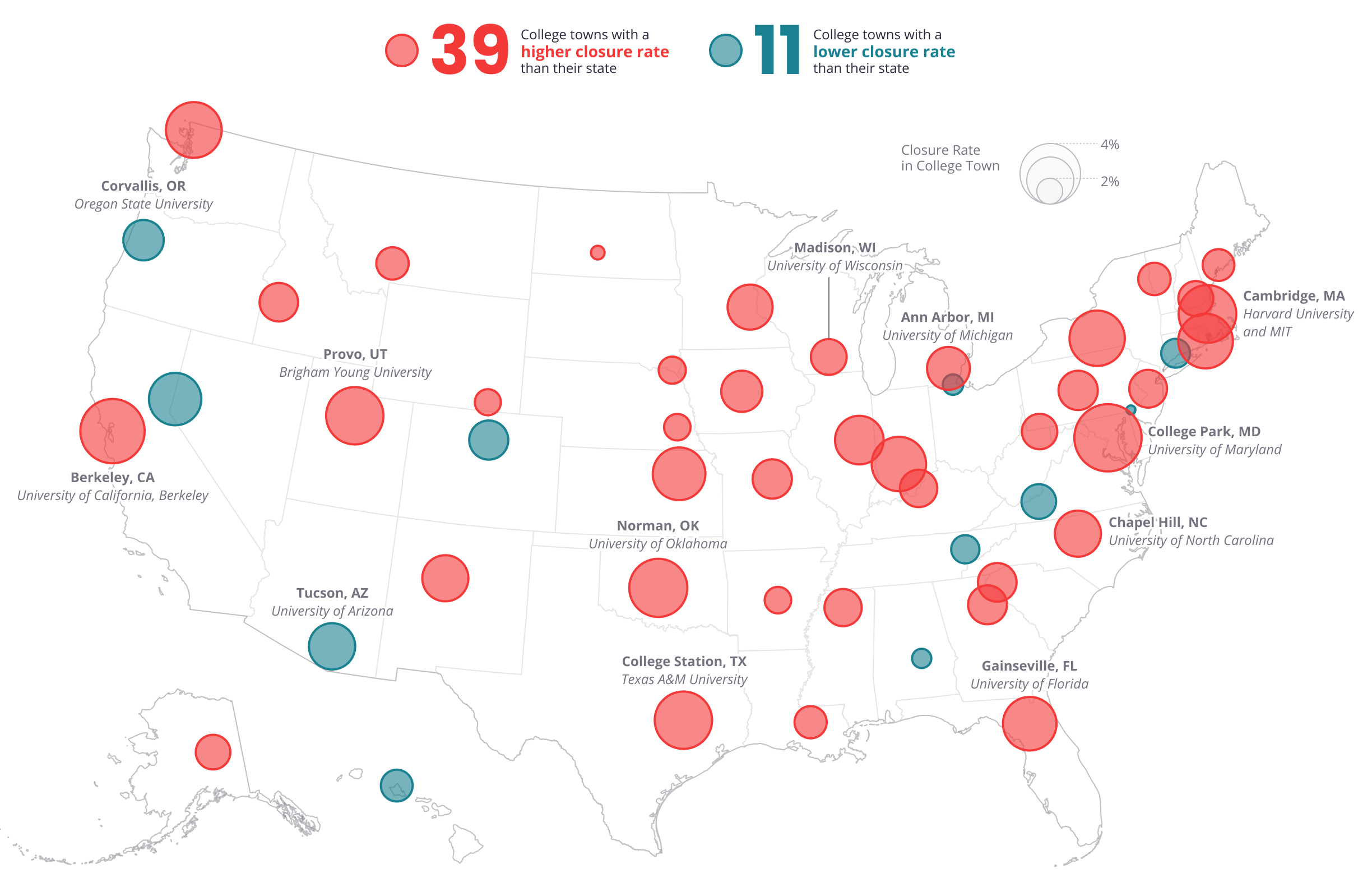 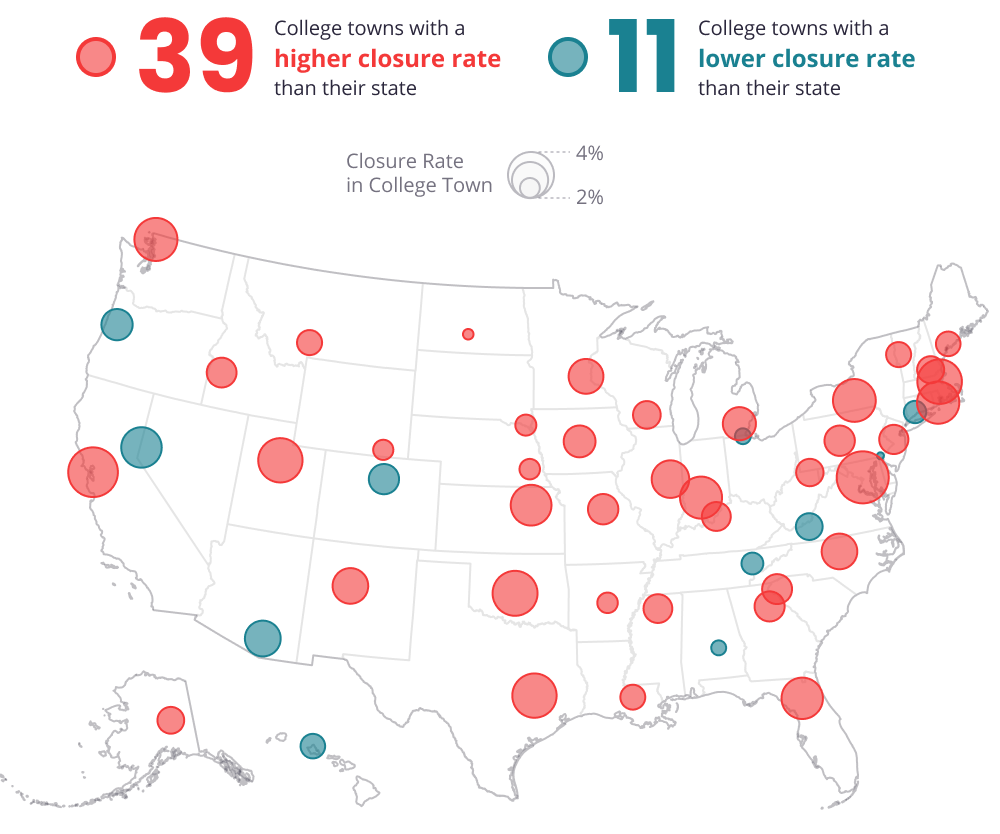 With fewer students in these cities the automotive, restaurant, and beauty industries have been disproportionately impacted, with 29%, 22%, and 19% more permanent business closures, compared with their respective states. However, bars and nightlife were impacted with high closure rates comparably across college towns and their state.

While many businesses in college towns are generally used to a slower summer season, when schools shut down early and transitioned to remote learning in March, many students moved back home to wait out the pandemic with their families. In fact, according to research from Zillow, a large majority of people who moved home in March and April, approximately 2.2 million, are college and grad school aged Gen-Z’ers, between 18 and 25 years old. This sudden population reduction in college towns shows a long term impact on those local economies.

Most College Towns are Seeing a Back-To-School Bump

Change in consumer interest on Yelp within college towns, August vs. July 2020 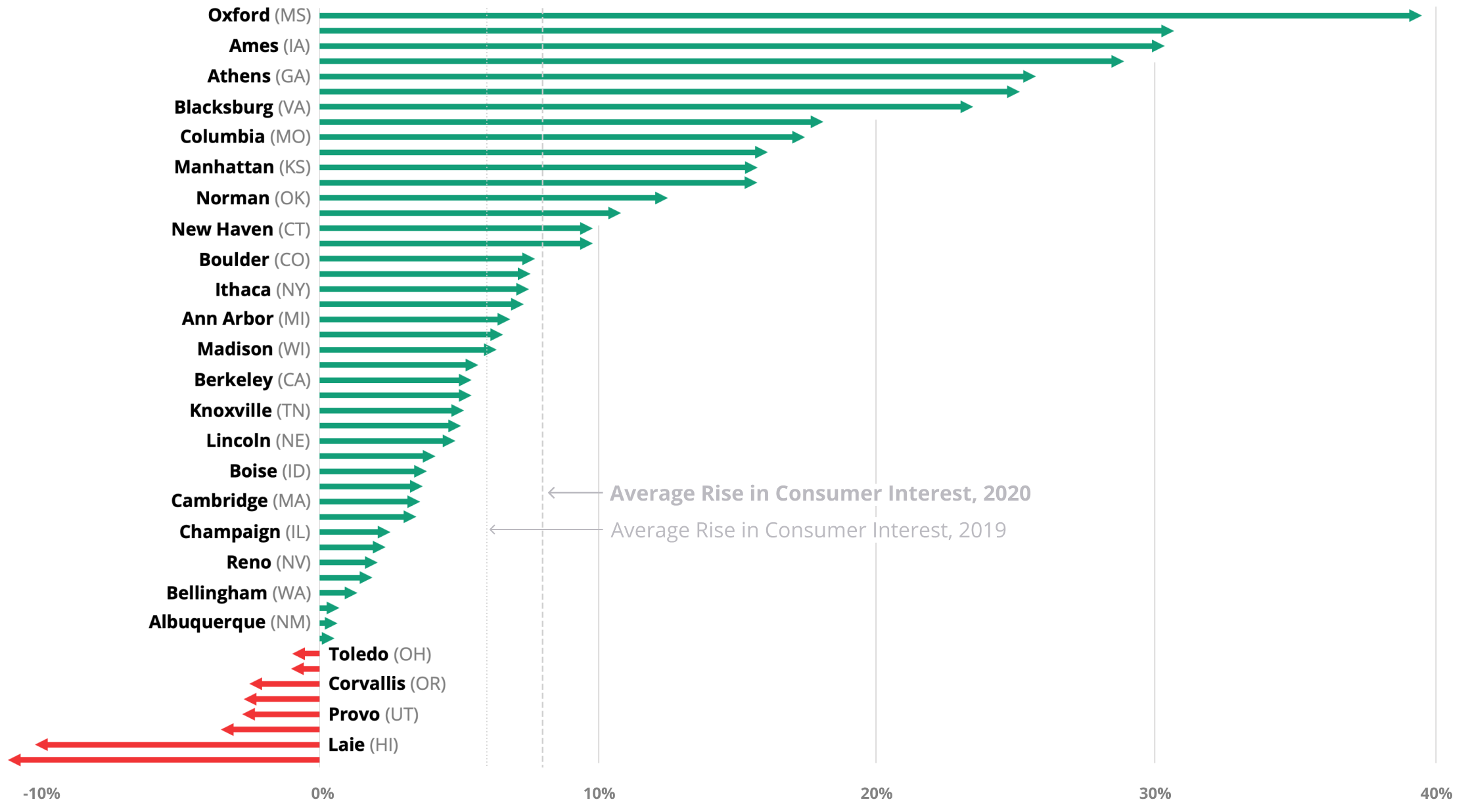 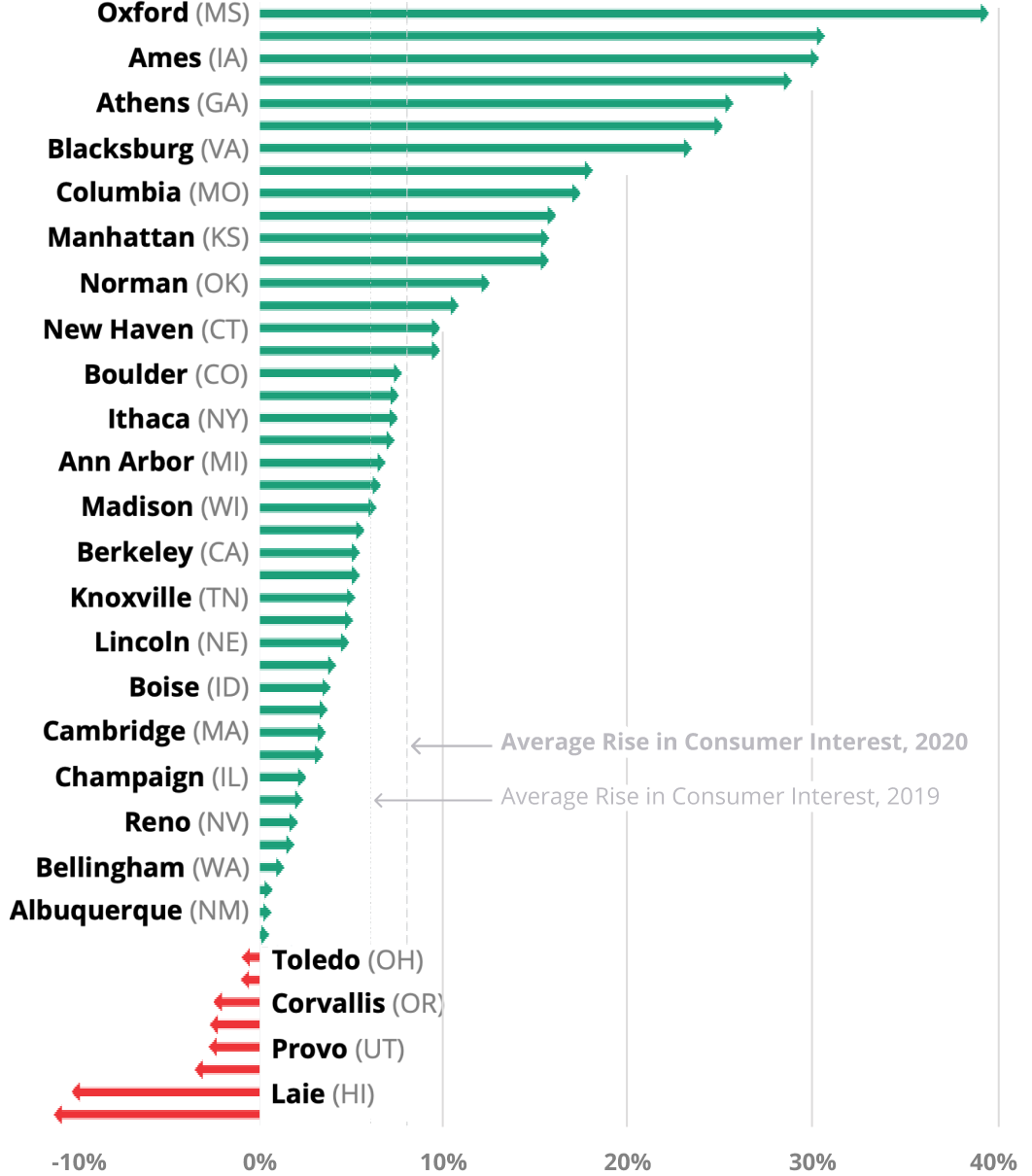 College towns are not all that's been impacted this back-to-school season. Parents with younger kids at home are adjusting to the uncertainty of the new school year. Yelp data shows the pandemic is afflicting several traditional back-to-school business categories, while other sectors of the local economy are focused on preparing homes to serve as classrooms.

Nationally, consumer interest in private tutors and home network installation is up (16% and 19%), showing an increase for businesses that aid home-based education. Interest in these categories is up even more (51% and 42%, respectively) in states, like Alabama, Kentucky and Texas, with earlier school starts. Not all businesses are faring well, interest in shopping centers and children’s clothing was down substantially (44% and 34%) in these states, reflecting the impact on the retail industry in parts of the country where the school year has already started for many students. Independent Waldorf schools, many of which are open for in-person learning where many public schools are not, are up 56%. (All measures are of share of relevant consumer actions on Yelp, including page views, reviews and photos, August 1-17 2020 compared to the same dates in 2013-2019.)

Consumer interest in uniforms, child care & day care, and bookstores were down 16%, 47%, and 36% from usual August levels, respectively. Nanny services were also down 32%, suggesting that parents may be rethinking childcare needs in the wake of new school guidelines.

Back-to-School Businesses Are Experiencing a Shake-Up

Change in share of relative consumer interest on Yelp for select business categories in the U.S.

Traditionally, August ushers in a mad rush to retailers like Office Max, Staples, Office Depot and Target as families prepare for back to school. This year, things looked a little different in the retail landscape. Many office supply retailers saw a dramatic spike in consumer interest at the very beginning of the pandemic as both students and professionals prepared themselves for their new school-from-home and work-from-home routines. For the two weeks following March 12, the national seasonally adjusted interest in office supplies chains was up 27% relative to the level of interest in 2020 up until that point. This uptick in interest quickly turned around in early April as the country entered full lockdown mode.

As students prepare to kick off a new year of school, many are finding their traditional back to school needs shifting. Having outfitted homes in March and April, there is no need to buy another monitor or another iPad as many schools continue digital efforts heading into the new school year.

The uncertainty of the new school year has some still shopping for basic school supplies and clothes. The decisions for in-person and remote learning plans have been coming in late and sometimes are left up to the school to decide. Parents still need to prepare for in-school learning, even if it’s taking on a hybrid model (and even if it only lasts a week or two). That said, consumer interest in major shopping retailers like Target and Best Buy has remained fairly steady and doesn't show a distinct "back to school" trend, indicating that many consumers predicted the shift to virtual learning and have already stocked up on basic supplies and technology earlier in the year.

Selection of College Towns: We selected one college town from each of the 50 states based on the list from Wikipedia.

Permanent Business Closures in College Towns: We measure the percentage of businesses that were open on March 1 and were marked permanently closed on August 17 in college towns and their respective states and make paired comparisons.