Local economies around the U.S. have continued to change quickly and dramatically – states and cities are slowly reopening, unemployment rates are starting to decline from the recent all-time high, COVID-19 cases are increasing in some states while decreasing in others, and communities are responding to the social unrest and George Floyd protests with city-wide curfews having impacted many businesses that were just able to reopen.

Yelp last reported on the state of the local economy in our quarterly Yelp Economic Average report on April 28, showing how much consumer activity in major swathes of Main Street had dropped off in just a couple of weeks in March. Now as states start to reopen and the nation responds to anti-Black racism and police brutality, a new set of challenges lay ahead for local economies.

Some Businesses Slowly Reopen, While Many Permanently Close

As of June 15, there were nearly 140,000 total business closures on Yelp since March 1. In April we reported more than 175,000 business closures, indicating that more than 20% of businesses closed in April have reopened. Las Vegas, NV, endured the highest number of closures relative to the number of businesses in the city (1,921 total closures), while Los Angeles, CA, had the largest total number of closures (11,774 total closures).

Some Businesses are Slowly Reopening, Many Remain Closed 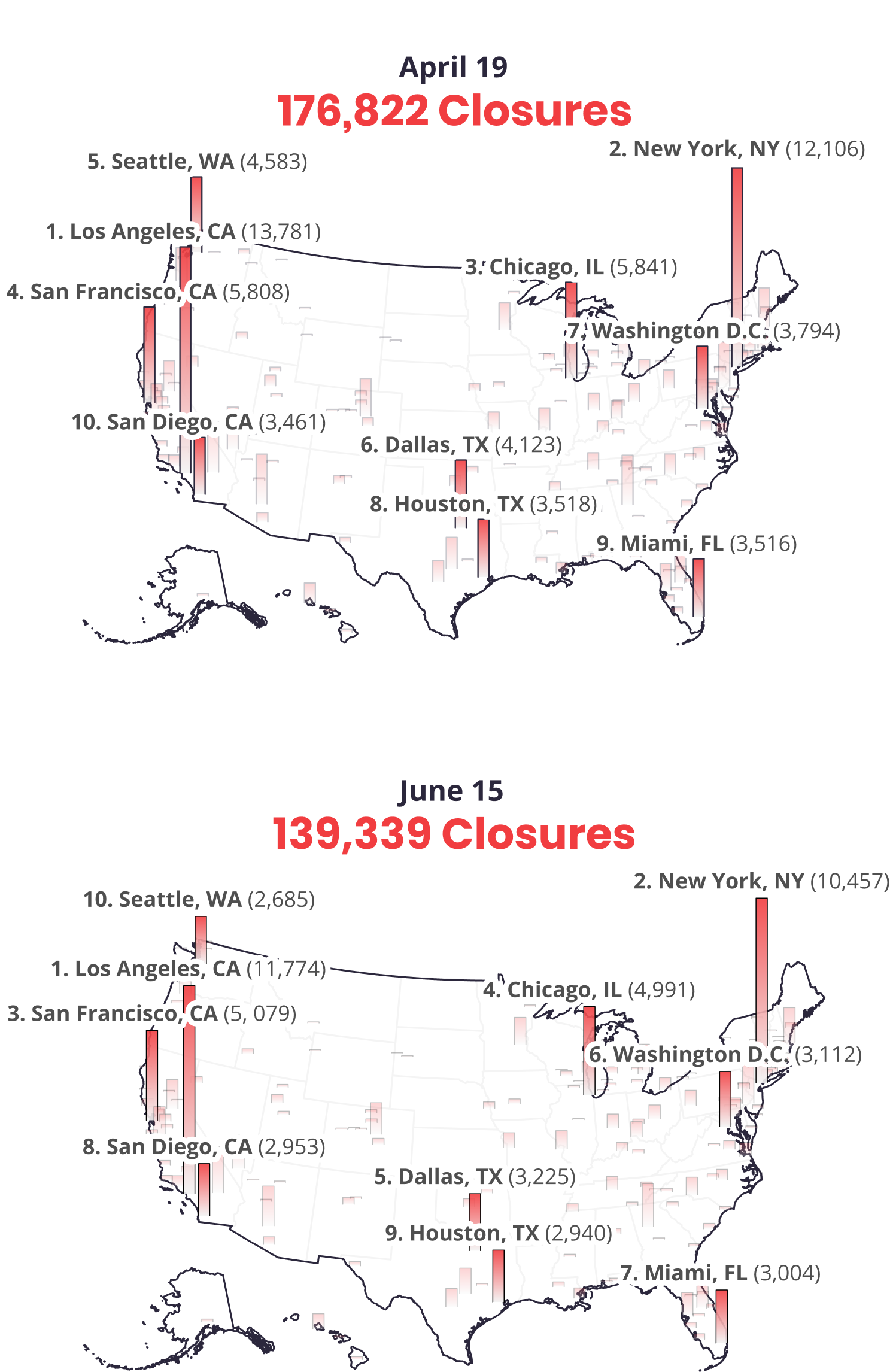 Of all business closures on Yelp since March 1, 41% are permanent closures. Our data shows the largest spikes of permanent closures occurred in March, followed by May and June, indicating that the businesses that were already struggling had to permanently close right away and the businesses that were trying to hold on, but unable to weather the COVID-19 storm, were forced to shutter in recent months.

In March, Restaurants had the highest number of business closures, compared to other industries, and have continued to close at high rates. Of the businesses that closed, 17% are restaurants, and 53% of those restaurant closures are indicated as permanent on Yelp. Restaurants run on thin margins and can sometimes take months or even years to break even, resulting in this higher rate of permanent closures.

Restaurants and Retail have been Hit Hardest 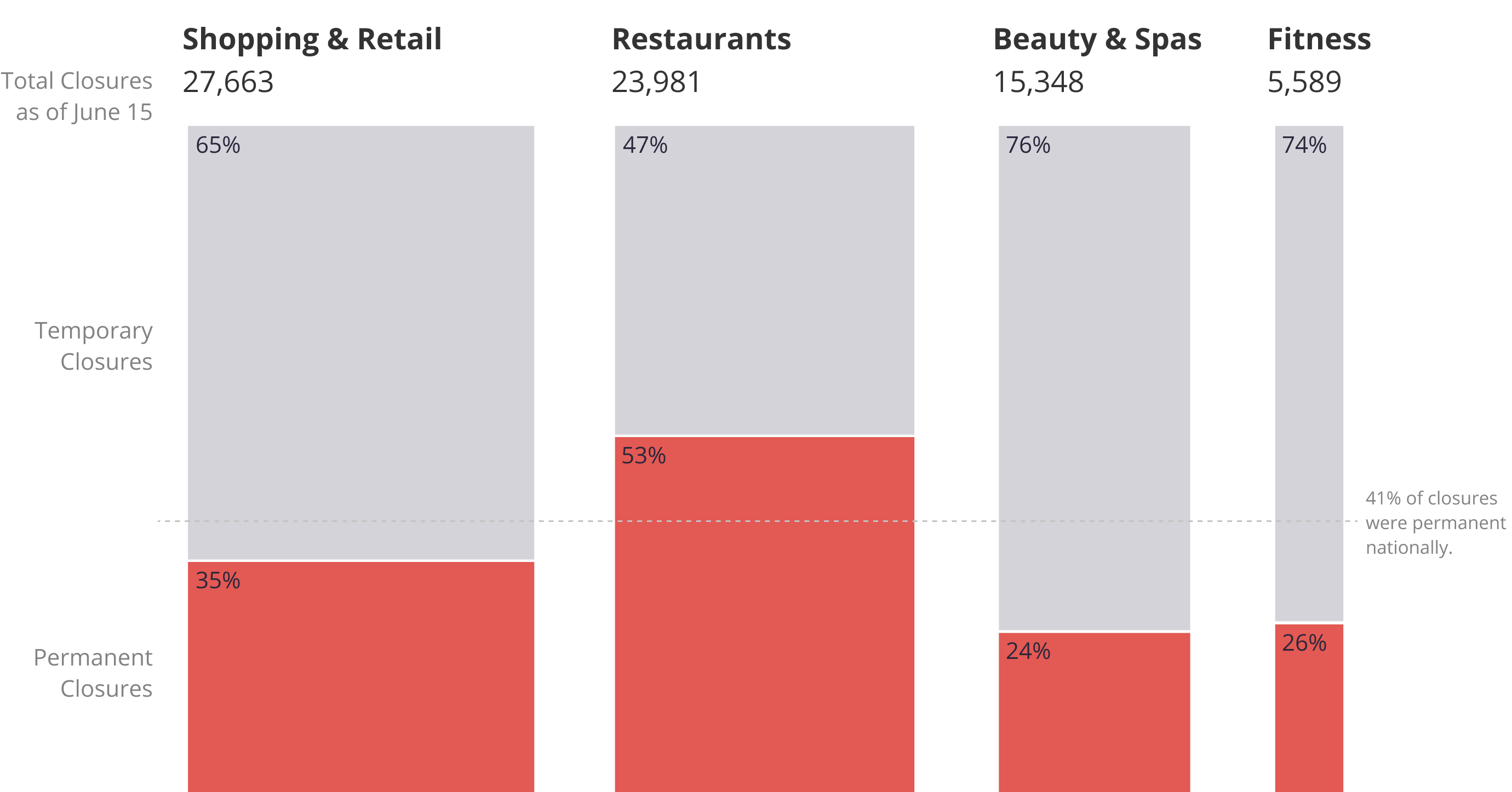 Though some businesses have shut down permanently, many have found innovative ways to weather the storm and continue serving consumers. Many restaurants pivoted to offering takeout and delivery, while some experimented with take home meal and drink kits, and even virtual cooking classes. Some are finding new ways to use existing technology, like Yelp Waitlist to manage curbside pickup. Servicing food to-go produces high margins for restaurants, and we’ve seen a 10X increase in searches for takeout since March 10.

With many retail businesses shifting to curbside pickup, we’ve seen consumer interest spike in obtaining their goods in this way with a 20% increase in searches for curbside pickup. In the beauty industry we’ve seen hair stylists offering video hair cutting tutorials, estheticians offering virtual consultations, and small shops shifting their focus to ecommerce. Fitness in particular has seen a significant shift in their business model with gyms and studios offering virtual classes and personal trainers offering one-on-one virtual training sessions. If nothing else, local businesses owners have proven themselves to be resilient and creative during these trying times.

The Desire to Support Black-Owned Businesses Continues to Grow

As acknowledgement of anti-Black racism and police brutality become more wide-spread across the nation people are continuing to look for ways to support the Black community. Since May 25, we’ve seen a 1785% relative increase in searches for Black-owned businesses, compared to the three weeks prior. Review mentions of “Black-owned” (and related terms) also skyrocketed, up 426%, as people look to support and surface these businesses to the community.

D.C. had the highest number of Black-owned searches, accounting for nearly 1% of all searches on Yelp, followed by Minnesota, Maryland, Michigan and Georgia. In fact, every state has shown an increase in searches for Black-owned businesses. Looking at metros, Ann Arbor, MI has the highest increase in searches for Black-owned, up 105X (accounting for 3% of all searches), followed by Denver (up 27X), Minneapolis (up 23X) and Baltimore (up 19X).

Percent of Yelp searches for Black-owned businesses by state 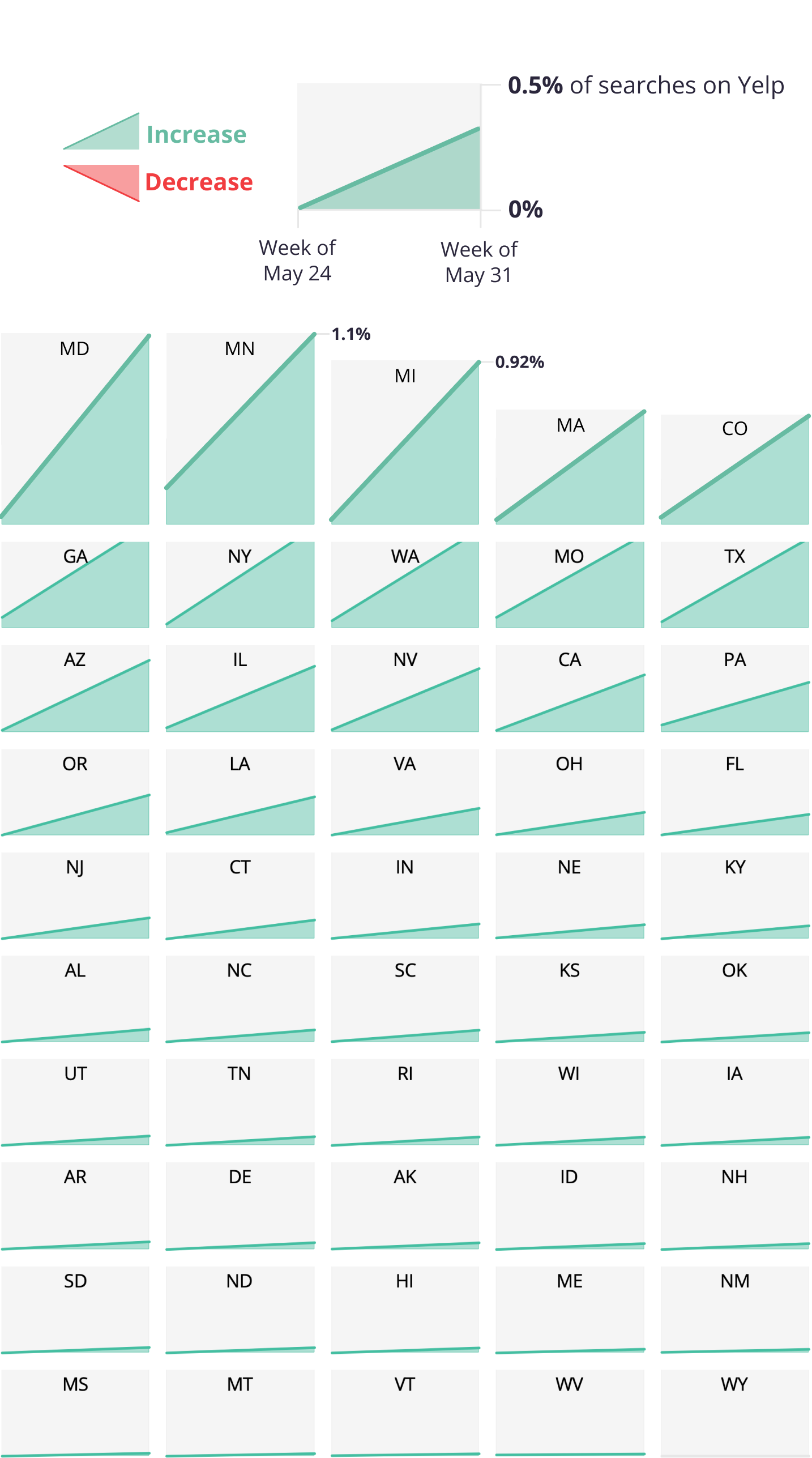 The Recovering Economy May Look Different Than the Old Economy

While some normal activity is starting to bounce back, due to the many changes impacting local economies — state rules, consumer behavior, and social unrest — many of the consumer interest shifts we saw in March and April started to rebound in May, with dramatic shifts in June.

Outdoor activities that became popular at the height of the pandemic as people were finding ways to stay active while social distancing – such as mountain biking (down 40%), lakes (down 34%), golf (down 33%) and hiking (down 28%) – have dropped in consumer interest since May 1 relative to other active activities. People are starting to feel more comfortable participating in indoor activities, with increased consumer interest for escape games (up 182%), Go Karts (up 147%), axe throwing (up 113%), gyms (up 81%), bowling (up 63%) and yoga (42%). That said, in some instances people are still finding ways to stay outdoors while social distancing with an increased interest in mini golf (up 132%), amusement parks (up 28%) and horseback riding (up 21%).

The previous spike in community supported agriculture and grocery has started to dip (down 54% and 26%, respectively) as people start heading back into restaurants. In fact, Yelp’s diners seated data shows significantly more people are dining-in at restaurants. During the peak of the pandemic, the number of diners seated across Yelp Reservations and Waitlist dropped essentially to zero. In early June, we've seen diners seated come back substantially – now down 57% compared to pre-pandemic levels. Restaurants that cater to group dining are among those making a comeback – fondue (up 123%), tapas bars (up 98%), hot pot (up 49%) and surprisingly, even buffets (up 17%) – as foods that gained increased interest through takeout and delivery have started to fall – pizza (down 28%), chinese (down 26%), fast food (down 18%). That said, takeout and delivery has continued to sustain interest on Yelp, still up 148% based on consumer interest relative to pre-pandemic levels, indicating this could be a trend that’s here to stay.

People are also headed back into malls with outlet stores, shopping centers and thrift stores all up (up 84%, 81%, 72%, respectively), as well as hosting or attending formal events with increased interest in bridal (up 70%) and formal wear (up 102%). The previous increase in cannabis dispensaries, head shops and tobacco shops has declined (down 40%, 35% and 32%, respectively). There have also been significant shifts in consumer interest for health and wellness businesses with an increased interest in saunas (up 75%), reflexology (up 69%) and dentists (up 28%), while skilled nursing (down 46%) and hospitals (down 37%) decline.

How Business Categories are Faring

As economies reopen, warm summer months arrive and consumers start spending more time out of their homes, we expect these shifts to continue changing at a dramatic rate. We'll continue to measure and report on these changes in local economies in our upcoming Q2 Yelp Economic Average.

—Daniel Gole and Amy Shapiro contributed to this report

Want to work with Yelp data yourself? We make a sample of our data available for academic use, and we’ve just added a new batch of data that reflects how businesses have reacted to the pandemic. Read more details about the latest update to the Yelp Dataset in our blog post.

On each date, starting with March 1, we count U.S. businesses that were open on March 1 and were closed on that day. Closure can be permanent or temporary, and is signaled by a business owner marking the business as closed, including by changing its hours or through a Covid-19 banner on its Yelp page. Closure counts are likely an estimate of the businesses most impacted, with many others not counted because they remain open with curtailed hours and staffing, or because they have not yet updated their Yelp business pages to reflect closures. Closures are counted by state, metro area, and category; some businesses are in more than one category. One-day closures that appear to be unrelated to the pandemic, such as for Easter, are not counted. The counts of closures shown in the map on each day are averages of the prior seven days’ closure counts.

Dine In vs. Dine Out

Consumers often indicate their intent when searching for restaurants by choosing filters for places that offer Yelp Reservations and Waitlist for dining in, or delivery and takeout for dining out. We’ve been tracking this measure nationally every day to see how restaurant meals are moving into the home. The data is calculated on a rolling seven-day basis, and compared to the level on March 8.

We measure daily consumer interest, in terms of seasonally adjusted daily U.S. counts of a few of the many actions people take to connect with businesses on Yelp: viewing business pages or posting photos or reviews. We start with the biggest U.S. categories by consumer actions. Among those, we select the biggest gainers and biggest decliners in terms of their share of all root category consumer actions since May 1. Then we choose representative ones to show the trend, which we’re charting from May 1 through June 15.

We compare the frequency of searches with words “Black owned” (and related words, like “Black-owned” or “Black business”) relative to all searches for the 3 weeks before and after May 25th. We count the mentions of the same words in reviews over the same time period, and group these by business category.